Reached for comment, Mrs. Mendoza said “I never expected to be a finalist, much less a winner.”  She viewed the recognition as “an achievement of the family and the community of Magtaking Elementary School.”  As its school head, “I am serving with a purpose – to touch and inspire,” she added.

For his part, Mr. Poquiz, emphasized that he won the award because of his constant communication with stakeholders.  He also shared that he is guided by the principle of making each day a meaningful journey to empower and uplift the lives of pupils.

The Gawad Lam-ang awarding ceremony will be held at the Sison Auditorium, Lingayen, Pangasinan on October 3, 2022 as part of the celebration of World Teachers’ Day. The winners will receive plaques and cash prizes while the finalists will receive certificates of recognition. 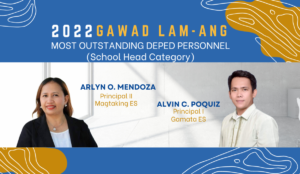 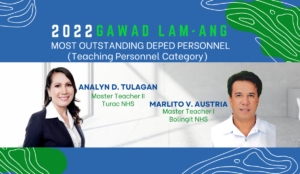 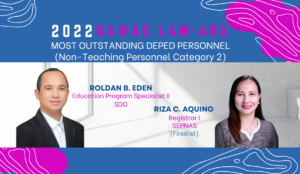